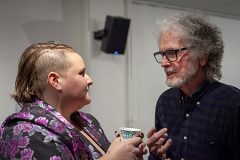 with author Jules Pashall at book launch for Diverse Bodies

CIIS seems like an oasis in the midst of the wreckages all about us, a community of nearly 2000 visionaries—faculty, staff, students, administrators—literally from all over the world.  It came together originally, like Esalen, under the umbrella of the Indian anti-colonial philosopher Sri Aurobindo who envisaged a world where all the wisdom teachings were gathered and shared in a common education project rather than carrying on old ideological battles. It has slowly evolved from a dialogue between “East” and “West” to include “North and South” and all the in-betweens, urging forward our communal inquiries to look for the sparks of wisdom wherever they are being kindled, and nurturing their flaming forth to find their rightful place in shaping a more humane and just world.

The late Michael Kahn and I createad The Somatics masters degree program in 1983 prompted by 2 goals:.

The then newly formed California Board of Behavioral Sciences offering the MFT license was a viable choice.

CIIS offered an important context where we could fully address what might be called the transcendental or spiritual aspects of the body, dimensions that radiate out beyond the simple relief of human suffering, the profound states of consciousness accessed through attentive and sustained body practices.  So many of us have had our spiritual yearnings nurtured by our practices of breathing, touching, sensing and moving.  And yet, how to articulate such unfamiliar dimensions in a dualistic culture.  CIIS is a place where many thoughtful people are engaging that conversation from different angles.

As the first graduate degree program in the field, and with the support of CIIS’s Public Programs, we have also become something of a think-tank for the development of the field, attracting many of the seminal creators: Lillemor Johnson, Ilse Middendorf, Charlotte Selver, Marion Rosen, Peter Levine, Ilana Rubenfeld, Anna Halprin, Bonnie Bainbridge Cohen, Emilie Conrad Da’Oud, Stanley Keleman, Robert Hall and Thomas Pope, Gerda Alexander, and Carola Speads, to name only the generation that is rapidly coming to an end.

I am now (March 2020) announcing here the exciting news that after these many years of developing our Master’s level clinical program, we are launching in September our doctoral degree in the Integral and Transformative Psychology Program with an emphasis in Somatics under the direction of Glenn Hartelius.  It is designed for that very special group of practitioners with a professional background in Somatic Psychology or in one or another form of Somatic Practice who would like to expand their careers into university teaching, writing, and research. Building on what candidates for the degree bring to the program, the program emphasis is on the refinement of critical thinking, the craft of writing, pedagogy, and the advancement of research into the many approaches to healing with the goal of graduating practitioner-scholars who are capable of joining the larger world of people and institutions that are devoted to the healing of the world.

To gain further information, you may contact me or the program itself.